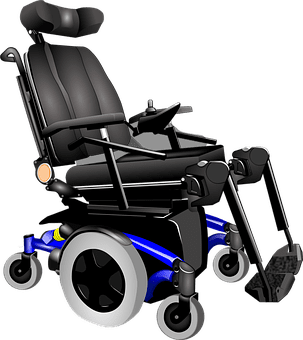 As Lynn’s multiple sclerosis has progressed over the years, we have gone though many different mobility assistive devices. Each has been a tremendous help but at each stage along the way, Lynn has resisted using them. Looking back, I wonder if he knew then what he knows now would it have made a difference?

For example, Lynn obviously had MS long before he was diagnosed with it. By the time he had an official diagnosis, he was having frequent falls, extreme fatigue, and difficulty standing upright. He grilled every night, rain or shine. To make it from the deck to the bedroom where he would watch television, he had to hold onto the hallway walls the entire distance. We have a dark smudge the width of his hand print all the way down the hall. I tried encouraging him to use a cane but he insisted he didn’t need one. I would regularly hear him fall. Each time I would yell, “Anything broken or bleeding?” As long as the answer was no, I would leave him alone to get up on his own (until I would hear the volume or frequency of swear words indicate it was time to step in). Finally, one day he proudly told me when I came home that he had seen a cool Irish walking stick on the internet which he had ordered. I think because it was “cool” it was okay for him to use it.

Before too long, the walking stick didn’t seem to be enough. Not only was there an issue with balance but his fatigue was so significant that any distance walking was very difficult. He would be so tired just from walking from where he parked his truck to our house, that the fatigue alone would cause his leg to give out and down he would go. If the leg didn’t give out, then he was battling the spasticity which kept him from being able to bend the leg at all. In either case, it was difficult to get him from the vehicle to the house or anywhere else. I suggested using a wheelchair which was absolutely rejected as an option. One day one of our friends showed up with a rollator (rolling walker). I told her he would likely reject the gift but since he didn’t want to offend her, he accepted it though initially he did refuse to use it. He refused, that is, until one day he fell and was too tired to get back up. I suggested he allow me to push him in the rollator, and he agreed.

After that night he allowed the use of the rollator if he needed to go a distance. I used it like a wheelchair. It was still off limits to mention the “w” word but he would allow me to push him around in the rollator. I actually pushed him around more than he walked. He really needed a wheelchair but could not bring himself to admit it. Then we had a couple of incidents where I hit something as I was pushing him along and we both went tumbling over. A rollator is just not sturdy enough to roll over cable or other object without it causing a complete stop, which, if I was unprepared for the abrupt halt, would result in us both going over. It was only when I almost got hurt from such a fall that he finally agreed to a wheelchair.

Our first wheelchair was a hand-me-down that did not have legs. I would lift his legs and pull him rather than push him. I insisted he needed a real wheelchair and he chose one he could propel himself (with the large wheels in back). He honestly tried to move himself around in it but it was apparent fairly quickly that he didn’t have the hand, arm, or shoulder strength to do that.

Having a wheelchair was a big improvement for getting him from place to place but he was dependent on my pushing him and it was fairly uncomfortable. At the time, he was getting physical therapy trying to help with regaining some strength and function in his limbs when one of the physical therapist suggested he attend a wheelchair clinic to look into a power chair. I’m so glad we took her advice.

The power chair clinic was an eye opener. I learned that wheelchairs are like clothes; you need to get measurements and pick them to fit the person. The sales rep was very familiar with MS and suggested he would need one that would allow his legs to lift and a tilt function as well as a head rest. He didn’t see the need but she convinced him that he needed to get it now while the insurance was paying for the initial chair because it would be very difficult to get it later. I’m very glad we listened to her advice because in just a few months, he needed all those features to manage.

Now his wheelchair is as much a part of him as his clothing and when it breaks, it’s a major catastrophe for us. We were recently without the tilt feature for two weeks and it was horrible. The tilt really helps me as much as him because when he tilts back, it removes gravity’s influence and it’s so much easier for me to take off his clothes or shift his position. His upper body is weaker now too so it’s difficult for him to hold his head up and not slump forward without the use of the tilt. In fact, after just two hours without it, he was really hurting and miserable. Fortunately, we had a portable access ramp that I was able to use to create an incline. It was a complicated process to set him up with this make-shift tilt but it worked. However, I must say, I felt like throwing a party when the tilt system arrived and was re-installed last week.

The last mobility device we have bought for his use is, unfortunately, one that he has never been able to use. He found a 4-wheel drive wheelchair designed by Radical Mobility in South Africa that could be used to maneuver through sand and other outdoor terrain. This awesome wheelchair was very expensive ($12,000 and not covered by insurance) but it would allow him to again participate in his favorite pastime-surf fishing. He ordered it but it never worked in the sand nor did it have the power necessary to carry Lynn up a ramp. The company said it needed to be reprogrammed and to send the controller back to them. That was four years ago and they have refused to return the controller despite our many attempts to get it back.

For the past year, I have excitedly looked forward to this year’s beach vacation.  I have dreamed about how awesome it would be, talked about it with anyone who would listen, and looked forward to it like a child looking forward to a Christmas Eve visit from Santa. I was so excited because I thought I had found the perfect place for Lynn to go that would meet all his needs and allow the rest of the familyThe basic unit in society traditionally consisted of two parents and their children but the family has now been expanded to include any of various social units differing from but regarded as equivalent to the traditional family. More to have a great time. This place sounded perfect.  It had an elevator, roll in shower, mobility assistance devices, wider doors, and a pool that slanted so he could roll into it on a floating wheelchair.  It sounded perfect…
Reality set in when we arrived. The first disappointment was that I misunderstood how high the elevator went in the house. I thought the elevator went to the top because it went to the second floor; however, this house has three floors.  I counted the first living area as the first floor and the entrance floor as the ground floor so when I asked if it went to the second floor, they said it did (and were correct) but I envisioned the third floor as the second floor instead. I was very disappointed because my parents and Lynn’s Mom have difficulty with steps.
Next issue: the elevator.  When we first arrived, I read the sign that said the elevator only held 500 pounds so between Lynn and the power chair no one could ride in the elevator to operate the controls.  He has very little hand strength so operating the elevator on his own would be difficult and frustrating.  I finally found the switch the next day to control the elevator from outside the cab so even though I was disappointed initially, it all worked out.
Then, we went to our room.  It was the smallest room in the entire house and I had more than twice the supplies and luggage needed for a week’s worth of living and caring for him.  Though it had a roll-in shower (a big plus), the actual space in the bathroom was very limited.  Then, when I tried to sit Lynn on the toilet, it was a disaster.  The toilet was sitting so close to the wall that the handrail placed on that wall to assist someone in getting up or down prevented him from being able to sit in the center of the seat.  His spastic arm was not able to be moved beyond the height of the rail and he was sitting in extreme discomfort besides not being safe.  I had to quickly get someone to hold him while I went to get the shower chair for him to sit on. However, the shower chair didn’t have a bucket so it could be used as a toilet chair so I had to improvise by using a lined trashcan–not a good experience.
The bed in the handicap accessible room was a queen size and took up most of the room.  That left very little room to maneuver his power chair so I had to move the bed against the wall to make more space.  The bed was high so it made transfers to and from more difficult.  While there was a TV in the room, it was small and difficult to see from a distance. The bathroom sink was just a sink and no vanity (though there was a good sized medicine chest there).   All and all, very disappointing and not handicap friendly….at least for his handicap.
And that’s my point… “his” handicap. This beach house is actually awesome. It’s big and spacious with lots of amenities, a wonderful pool, and lots of space on the second floor to move around.  I’m sure that if it was used by someone who did not need to share a room, who only used the over-head lift equipment to get in and out of the bed, whose toileting was not done on the actual toilet or who managed it without assistance, the challenges we had with the room would not be an issue.
I complain often that a “handicap accessible” label is a distinctive misrepresentation of most places.  Most of the time it just means handrails or bars attached to the wall in the bathroom.  I’ve never actually been to a place that was really equipped for someone totally mobility challenged.
continue reading at: http://multiplesclerosis.net/living-with-ms/thought-bigger/