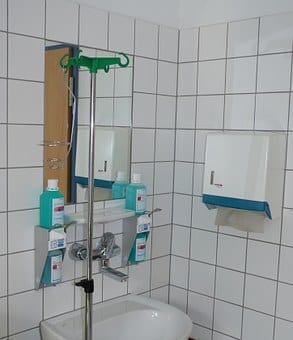 I’ve discovered that buying things to make life easier for a caregiver gets expensive; however, with just a bit of creativity, you can have devices to help out that work almost as well for a lot less (other than the time it takes to make them).

Lynn has been a carpenter, is very creative and has come up with a bunch of things to help him exercise.  I’ve been able to look at magazines and come up with ideas also.  For example:
Don’t like covers on your feet?  Lynn doesn’t either.  What did we do?  Took PVC pipe and glued straight pieces and curved joints so that it sits on the floor and rises above the bed height high enough to keep the covers off Lynn’s feet.  Pipes fit under the mattress to keep it stable, and extensions come off the top to drop the sheets over.

Lynn doesn’t like his toes to rub together. Currently, he’s wearing toe socks, but before he started wearing those, I cut up IV tubing from one of his hospital visits to insert between his toes.  Kept them spread just enough without being uncomfortable.

Lying flat on your back, make your back hurt?  Buy some foam bed pads, cut them up into 3′ x 4′ sections, and tape them on top of each other.  Then make a pillowcase to put them in, and you have a pad to put under both knees at the same time to keep the knees bent and pressure off your back.

Does your loved one fall sleep in their wheelchair and then complain that their neck hurts because the muscles stretch excessively?  Take a stretchy cloth headband and some twine.  Tie the headband to the head support on the wheelchair.  Put the headband around their forehead so that when their head falls forward when they fall asleep, it will be in a neutral position and not overstretch their neck muscles.

He has several carpenter friends.  Lynn designs the devices give them the specs, and supervises the construction.  Here’s some of what he has created:

Exercise equipment for his quadriceps:  He took a flat board and had tracks added to it.  On the tracking, he had them fix a platform against which he could position his feet.  He had handles put on each side of the board at the top then bought bungee cords that went around the end of the platform from handle-to-handle. He pushes the platform with his feet; the bungee cords pull the platform back, so he exercises his quads.

Core strengthening: He took PVC piping a constructed two sections held together by a wooden pole inserted between them. The PVC comes around in front of him and is a little higher on the ends.  A piece of PVC is under the mattress to keep the pipes from moving.  He sits on the bed with the piping around him to balance.  If he starts to lose his balance, he has pipeline all-around to grab.  He also uses it to do push-ups and build arm strength.

Preparation for reeling in fish:  He created a pole on a base with a hinge.  Then he had a bungee cord connected from the tip of the pole to the wall, and he had a fishing reel attached to the pole.  He could practice reeling, and he could pull back on the bungee cord to strengthen his “pull” for reeling in the fish.

What now?  He’s trying to find a motor he can get customized so he can put a trough on either side of the motor that the motor will raise up and down periodically while he’s in bed. This would allow him to flex his leg muscles periodically and relieve the stiffness he gets at night so he (and I) would not have to get up so often.

Creative, huh?  He looked to patent some of the ideas but getting a patent is VERY expensive, so I guess he will be the only one to benefit from his ideas but if you are interested and want to make one of these yourself, send me an email, and I’ll try to get you more detail.