Dissociative disorder is a Memory Disorder

Dissociative DisorderDissociative disorders: People with these disorders suffer severe disturbances or changes in memory, consciousness, identity, and general awareness of themselves and their surroundings. These disorders usually are associated with overwhelming stress, which may be the result of traumatic events, accidents, or disasters that may be experienced or witnessed by the individual. Dissociative identity disorder formerly called multiple personality disorder, or "split personality," and depersonalization disorder are examples of dissociative disorders. The person feels like more than one voice is attempting to control his mind.  The identities have unique names, characteristics, mannerisms, and voices. The individual experiences gaps in memory when the other identities are present. https://www.webmd.com/mental-health/mental-health-types-illness More Involves Memory Loss

Dissociative disorder is a type of memory loss disorder that develops due to trauma rather than a disease. With dissociative disorder, the person unconsciously escapes from reality by disconnecting their thoughts, identity, consciousness, or memories from what is real to what is not real.  It can happen at any age to anyone suffering from a traumatic event such as abuse
•  Improper or excessive use or treatment, physically mistreated
• To use excessively, to injure or damage;
• To inflict physical or emotional mistreatment or injury on (as one's child) purposely or through negligence or neglect
More or military combat. The “escape” provides them with a way of handling an emotionally difficult situation that they otherwise cannot control. As the situation becomes worse, so do their symptoms.

TreatmentTreatment refers to the handling, usage, techniques, or actions customarily applied to a situation. More

Treatment requires psychotherapy and medication usually and can be difficult to achieve a successful outcome.  Signs and symptoms include:

What are Memory Disorders and What is Dementia?

Many people think that Dementia and senility are the same things, but they are not. Senility is the normal physical and mental decline associated with getting older. It’s a normal part of life and not due to abnormal brain function, whereas Dementia is a brain malfunction. However, it’s easy to confuse the two because they appear very similar.

What are the signs of dementia?

Note:  Symptoms are progressive.  They begin as a minor annoyance and become progressively worse over time until they cannot function independently.

How does Alzheimer’s relate to Dementia?

Alzheimer’sAlzheimer’s is a degenerative brain disease recognized as the most common form of dementia. It usually starts in late middle age or in old age and results in progressive memory loss, impaired thinking, disorientation, and changes in personality and mood. The degeneration of brain neurons especially in the cerebral cortex and the presence of neurofibrillary tangles and plaques containing beta-amyloid help to diagnosis it on testing. More is a form of Dementia that is caused by brain cell death. The primary characteristics of Alzheimer’s revolve around issues of memory loss, unclear thinking, and changes in behavior.  Symptoms develop slowly and get worse over time, becoming severe enough to interfere with daily activities. There is no cure, but treatment is available for symptom relief and quality of life.

Alzheimer’s is the most common form of Dementia

Alzheimer’s accounts for 60-80% of all Dementia cases. Alzheimer’s progresses more quickly than other Dementia conditions. For example, in the early stages of Alzheimer’s, memory loss is mild. With late-stage Alzheimer’s, individuals lose the ability to carry on a conversation or respond to their environment. On average, a person with Alzheimer’s lives four to eight years after diagnosis. However, in some cases, individuals live for as long as 20 years. Alzheimer’s is the 6th leading cause of death in the United States.

If you identify any of the following warning signs, seeks medical advice for possible treatment options.

As the condition progresses, you may also see personality and behavior changes—some of which may be difficult to accept. Remember, your loved one cannot control what is happening to them and would not take on the negative behaviors they may now display if they could stop themselves. With Alzheimer’s, the personality changes are due to impairments in brain function changes—like an amputation.  Once the part is gone, it doesn’t grow back.  The same is true currently for Alzheimer’s.  Once the part of the brain affected by Alzheimer’s dies, that functionality ceases.  Other parts of the brain attempt to compensate, but it may not work the same. Therefore, try to see the personality changes of your familyThe basic unit in society traditionally consisted of two parents and their children but the family has now been expanded to include any of various social units differing from but regarded as equivalent to the traditional family. More member through the eyes of grace.

Resource information for Alzheimer’s and Dementia 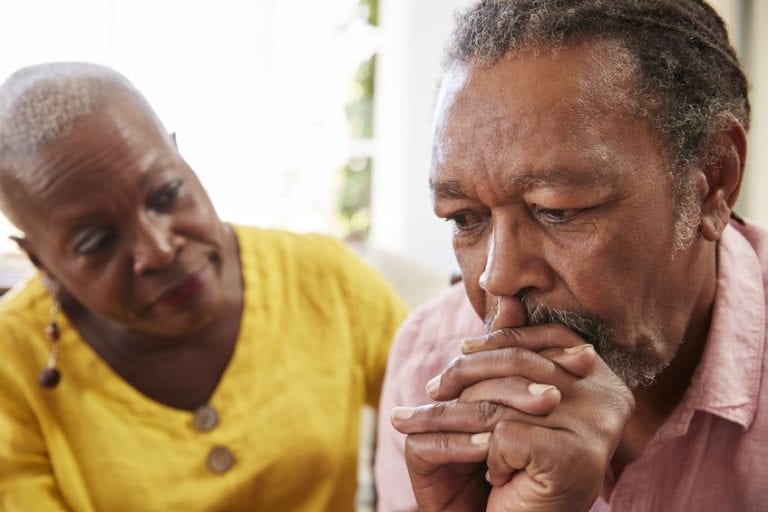 5 Tips for Talking to Your Loved One with Dementia

How to Respond to DelusionsDelusions are false beliefs or opinions strongly held as fact but not based on evidence that a person thinks are real. They can be about people or things. For example, the person may think his or her spouse is in love with someone else. More in Dementia

3 things to Never do with your loved one with Dementia