Skip to content
https:// Home ». How to Do Things ». Prevent Infections – Wash Your Hands ». Contagious Diseases

Building a barrier between you and the organism can further reduce your risk of acquiring or spreading the infection. You can accomplish this by washing your hands, wearing gloves, or covering your clothing.  If a job is going to be extremely messy, you may want to add a cap and mask to your outfit.  Your goal is to keep the nasty organism from entering any opening in your skin, even the ones you can’t see.

I wash my hands frequently and, therefore, have multiple cuts and abrasions from friction burns. I always wear gloves as an added barrier to cover these openings even if I’m not aware of Lynn having any harmful bacteria I need to avoid.

Your doctor may tell you that your family member has a condition that requires “airborne precautions.” What that means is that they have a respiratory infection they can pass to other people. There are lots of ways to spread germs. The bacteria or virus can travel through the air with coughing, sneezing, blowing the nose, spitting (when making a sound), during eating (child), or other expressions of saliva (children have many creative ways). The tiny microscopic virus or bacteria may catch a ride on a speck of dust and travel through the air to other family members to infect them as they take their next breath. The particles are less than 5 micrometers in size and can travel up to three feet to land on someone else. (Is there any wonder that the flu spreads so quickly in school systems?)

If your care-receiver has a condition that is spread by airborne means, observe the following precautions: 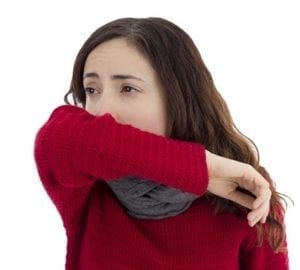 We handle conditions spread through droplets the same way we manage airborne diseases. The offending germs travel on a respiratory droplet from a sick person through a sneeze, cough, or talking up to three feet to invade the mucous membranes of a susceptible host.

A point of interest:  The common cold (rhinovirus) is contagious for the duration of the illness for as long as you are producing moist secretions.

All bacterial-induced diarrhea gastroenteritis– Till symptoms under control

Clostridium difficile (C diff) gastroenteritis – duration of illness plus several days after diarrhea stops because the virus continues to shed for several days. Alcohol-based hand cleaners do not kill C diff. – must use soap and water and antimicrobial soaps.

Coronavirus – isolate for 14 days or until symptoms are gone whichever is longer.

Hepatitis A – for one week after onset of symptoms

Shingles (Herpes zoster) – If anyone in the house is immunocompromised, cover the lesions entirely and keep them covered until all are dry and crusted

Impetigo – for 24 hours after treatment starts

Norovirus gastroenteritis – duration of illness and 24-72 hours afterward. Recommend wearing a mask while cleaning up after any spills or accidents that occur.

Chickenpox – until all lesions crusted

Avian Flu – isolate for 14 days after onset of symptoms

Chickenpox – isolate until all lesions crust, and no new lesions appear

Coronavirus – isolate for 14 days or until symptoms are gone whichever is longer.

Herpes zoster – isolate as long as present in a patient who is immunocompromised.

Influenza (Flu) – May carry the virus for 1-4 days after exposure and 24-hours after fever ends.

Measles – isolate for four days after the onset of the rash.

Meningitis – may carry bacteria for 1-10 days, depending on type before symptoms show. Isolate until treatment is effective for acute symptoms for 48 hours.

Mumps – isolate for five days after the onset of parotid gland swelling. May carry the germs for 16-18 days before symptoms show.

Norovirus – Isolate for 24 hours after symptoms stop. Symptoms begin 12-24 hours after exposure. Must use extremely good handwashing with this one. Very contagious.

Rubella (German Measles) – First symptoms show 14-17 days after exposure. Isolate for seven days after the rash begins.  It is vital to keep away from pregnant women while this disease is active. Due to risks to unborn children if exposed.

Severe acute respiratory syndrome – for the duration of illness plus ten days after resolution of fever.

Tuberculosis, pulmonary or laryngeal disease, confirmed – until the patient develops clinical while on effective therapy and has three consecutive sputum smears negative for acid-fas bacillus, collected on separated days