Skip to content
https:// Home ». How to Do Things ». Mobility Challenges

Getting Around When Nothing Moves Well

My husband has primary progressive multiple sclerosis (MS). Though he can move both arms and legs, he can move none of them well enough to accomplish tasks. Nerve damage from MS, along with muscle spasms, and weakness from lengthy hospital stays, contributed to his current state of powerchair dependency. He needs full assistance with all activities of daily living and anything he wants to do.

At the time of his initial diagnosis in 2006, Lynn was very athletic and only showed signs of occasional foot drop and other muscle weaknesses.  He ran, lifted weights, rode bikes, and could physically do whatever he needed without difficulty.  He was completely independent.

However, his physical decline was rapid. As the fatigue increased, he started using a walking stick and progressed to a rollator walker within a year. The walking stick did not give him the full balance he needed to prevent him from falling.

Lynn was a proud person (stubborn actually) and did not like to rely upon anything or anyone. Therefore, he preferred the walls as his “support-of-choice” whenever he could use them.  Family and friends grew concerned as he continued to use a walking stick rather than a rollator.   Finally, a friend brought one to our home and dared him not to use it since it was a present. Pride lost, and gratitude won that battle.

His ability to walk became progressively worse as his need to use the rollator as a wheelchair instead of a walker happened regularly. He continued to refuse to consider the idea of using a wheelchair. Then, one day in 2009, his refusal to face reality all came to an end.

Lynn was home alone. He started to walk across the floor and felt his legs begin to go. Just before hitting the floor, Lynn reached over and grabbed his cell phone to call for help. Try as he might, he could not get up.  He didn’t want to call 9-1-1 because he was headed to the shower and had on no clothes. After calling me to come home, he waited three hours on the floor alone and afraid. When I arrived, he was dehydrated, overheated (he was lying next to a heating vent), and emotionally traumatized. Though tricky, I managed to get him back to bed and treated his condition.

The Beginning of Change

Though traumatic, the fall had brought reality home in an authentic way.  Lynn had no more delusions. It was a turning point that all people with chronic illness seem to face at some point.  Each person seems to have that moment of reality where it all becomes real for them. That fall was Lynn’s. He was just very fortunate that it turned out as well as it did. 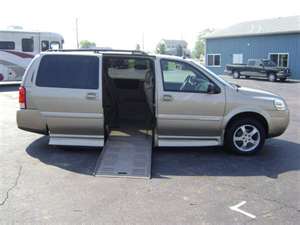 As my husband’s mobility assistance devices became more substantial and his ability to move became less, my need for transportation assistance became a challenge.

For many years, I transported Lynn using a four-door sedan.  I manually transferred him to and from the passenger seat from his powerchair using a lot of prayers and personal body strength. I came very close to dropping him a few times in the summer when his MS was particularly affected by the heat, and he was unable to help me with the transfer at all. After one very close call, we decided that the debt would have to be incurred and moved forward with the decision to purchase a conversion van.

As with all caregiving lessons, it was an eye-opener.  The cost of the van was extremely high compared to a typical van of that same model. Therefore, my bank refused the loan, saying the seller was asking too much.  I had to prove that the conversion kit makes the van more expensive. My simple purchase took two weeks for approval instead of the usual one.

We finally got approved, and then I had to learn to use the equipment.  All those straps to secure the wheelchair! The first time I drove the van, the door wouldn’t close due to parking on uneven pavement. I’ve learned I have two batteries, and one runs down the other if I leave the radio on when I turn off the motor. There are all sorts of new and exciting discoveries with this van, but I wouldn’t trade it for the world.  It’s a lifesaver, and I would never be without one again as long as Lynn has a powerchair. Love it!!. 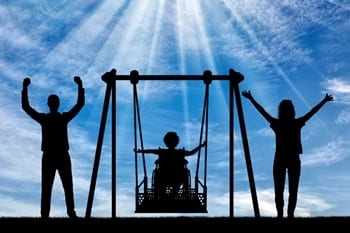 Caregiver Marketplace Check out links to products recommended to help caregivers cope with the challenges of caregiving at home. Ideas are available on everything from positioning to self-help books, mobility devices, to skincare.

Having the right equipment can make all the difference in how well you function. Have an experienced technician measure your family member to the equipment (as in this case– a wheelchair).

One size does NOT fit all.  The chair must fit the body perfectly to prevent skin breakdown and other injuries. The body, torso, leg, and arm length must all be accurate.  If it’s not, harm may occur to your family member’s body due to friction or undue stress.

If you get a chair and it’s not right when you take it home, call them to come work on it. Keep calling until it’s right.  The chair is part of their body when they are in it and must function correctly the same as their heart and lungs. Keep the vital signs healthy, just like those of the body.

TRANSFERRING FROM A WHEELCHAIR INTO A CAR

In each of these videos, it’s important to note that the mobility assistive device is sized to the individual and safety precautions are always used. It’s easy to forget an immobilized person’s limitations.  However, you must keep that in mind always. Stay alert to potential risks of injury Maintain awareness at all times of what may lie in front, back and to the sides; even above and below the individual that may cause harm if the person cannot fend off that harm. Make it a habit to assess the environment for potential risks each time you stop and settle in a new location for an extended period.

How to Use A Walker

This video explains how to correctly use a walker to maintain balance in walking.  Walkers can be purchased at drug stores and many general merchandise stores. If you plan to get one, it needs to be the right height and easy to manage when getting in and out of a vehicle so you know it will be used.

How to Use a Rollator Walker

This video explains when is the best time to use a rollator walker, how to use one and what precautions to take when using one.

How to Use a Cane

A cane can be used to help maintain balance. Like a walker, it needs to be the correct size to achieve the desired result.  If it’s too short or long it will not be effective and may cause the user to lose their balance.

How to Use a Walking Stick to Climb Steps

How to Use Crutches

This video explains the proper use of crutches. Crutches should be sized so that two fingers can fit between the top of the rest area and the shoulder rest for the animal. This cushion is needed to prevent injury to the nerves under the armpit.

How to Use Forearm Crutches

This video demonstrates the use of forearm crutches

Using a Convaid Stoller for a Wheelchair

This video provides an example of how the tilt function of a wheelchair can be used to provide benefits to some individuals in wheelchairs that cannot be provided by standard models.

Physiotherapist demonstrating with a client the safe use of a Forearm Support Frame, how to adjust the frame to the correct patient height, safety check, and safe mobilization techniques.

This site uses Akismet to reduce spam. Learn how your comment data is processed.