Who Becomes A Caregiver? 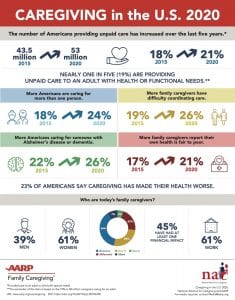 The National Alliance for Caregiving and AARP  published the results of a survey conducted in 2020 that tells the story of caregiving in the US today.  According to “National Data on Caregivers,” 53.0 million adults in the United States provide care to an adult or child with special needs during the previous twelve months before the survey in 2020. That number showed an increase of almost seventeen percent over the past five years. With that increase, one in five American adults now serves at least part-time as caregivers.

What did the survey find out about who becomes a caregiver in the United States? Do middle-school kids pick caregiving as a career path? Are individuals promoted or advanced through experience in the roles? The report tells us a lot about who caregivers are and what they do.  It also confirms that most caregivers are family members who assume the duties associated with their role in the family. Each of the following panels tells us a little more about who becomes a caregiver and why.  As one caregiver “living the life” to another, it’s not surprising information.

According to the National Data on Caregivers, Who are Caregivers?

What Does This Tell Us?

Looking at these statistics, it seems that the majority of caregivers are white females. This information also implies that spouses or older relatives tend to care for one another, and the grown children take care of older relatives or friends. It is also interesting to note how many children are caregivers for family members.  Based on this data, a child could become a caregiver and continue in the role for most of their life if they had a parent unable to care for themselves.

What Does This Say About Caregiving?

The survey shows that care recipients need care that is more complex.  Often the type of care needed is similar to that received in a hospital setting but delegated to the caregiver. The caregiver is responsible not only for the complex nursing or medial task but also for the activities of daily living and instrumental activities. Therefore, the unpaid caregiver has a 24-hour shift where he or she is (1) helping a person do everything they need to do to care for their personal needs and entertainment for the day (2) conduct and coordinate all of this person’s personal affairs, (3) do the upkeep for their home and personal belongings, (4) keep up with their multiple medical appointments and treatments in addition to taking care of themselves, their own families, their own homes, maybe a job, and maybe their health concerns.

The unfortunate facts in many rural areas are that resources to support these individuals do not exist. In rural areas, the distance to travel prohibits access.  In municipalities, the systems are over-burdened. Too much need and not enough resources.

Most caregivers must work to pay the bills to care for their families. While the Family Medical Leave Act (FMLA) exists to allow them time off to take family members to appointments, there is no pay.  Therefore, the loss in pay prevents them from having the option to follow through on medical appointments. While it is also illegal to threaten someone who uses their Family Medical Leave Act rights to take time off to care for their family, the supervisor not so subtly communicates that taking time off is not appreciated.  Once someone starts to use the benefit regularly, close attention to other aspects of their work begins, and problems develop at work.

The above tells me that caregivers don’t stop and take the time necessary to care for themselves. Their focus is on the care receiving care, and they selflessly put themselves out of the picture.  Now, I’m not saying they don’t complain about it, but they put the other person’s needs before their own. If the one needing their care gets sick, and the caregiver has an appointment, they cancel their doctor’s appointment and may never get around to rescheduling.

The above tells me that caregivers don’t stop and take the time necessary to care for themselves. Their focus is on the care receiving care, and they selflessly put themselves out of the picture.  Now, I’m not saying they don’t complain about it, but they put the other person’s needs before their own. If the one needing their care gets sick, and the caregiver has an appointment, they cancel their doctor’s appointment and may never get around to rescheduling.

Based on Information Gathered from the National Data on Caregivers, Why Are There So Many Caregivers?

Why So Many Caregivers?

Fifty-three million adults are a lot of caregivers! So, what did the “National Data on Caregivers” show regarding why we have so many caregivers? Do we have a national crisis featuring a lack of resources available to care for people in hospitals? Our home health services that much better than hospital services?  Why the push for care at home? 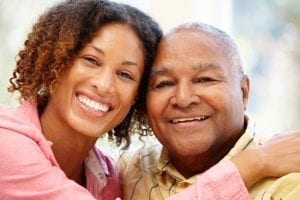 The baby boomer generation is getting older and developing medical conditions requiring access to services. They do not always need to be in the hospital. Often all they need is assistance from family members. However, many have no immediate family available to provide care, increasing the need for in-home companion assistance and long-distance caregiving skills. A baby boomer, who becomes a caregiver to a spouse or friend, is also likely to one day need care themselves.

Many healthcare workers, including long-term healthcare workers, belong to the baby boomer generation and are retiring. The generations following them entered fields such as information technology rather than service industries leading to a deficit in the healthcare-related workforce pipeline. Therefore, as baby boomers retire, there are fewer trained replacements to assume their roles.  Knowing this staffing crisis was on the horizon, healthcare’s solution was to begin developing programs promoting early discharges and family care at home. The idea was that families would provide patients with the care they needed at home in an environment where the infection risk was less. The bonus was that it also freed up a room for the next patient.

States have pushed the responsibility to provide services to low-income and special-needs families to the local governments. Funding did not accompany the additional responsibility resulting in a reduction in service availability. The result is a loss in available resources to many families unable to meet their share of cost or drive the distance required for access. Many companies continue to struggle with finding solutions to this issue.  Consumer-Directed Services are one way Medicaid helps those eligible access care options when services are not readily available. 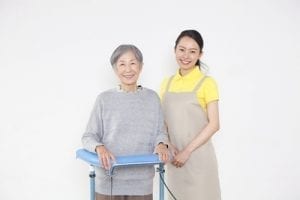 One explanation for the increase in the percentages reflected in the survey is that caregivers want others to know about their existence. They realized that unless others are aware of the need for resources, the change will not happen.  Therefore, they are participating more in surveys.

Where do Caregivers get their Information according to National Data on Caregivers?

Do Caregivers Get Their Information From Their Doctors?

What Does This Mean?

If their lives are like mine,  it’s because they don’t have the time or the opportunity to leave home to go somewhere to meet with someone to get information.  If they have a break to get information, it will happen at 10:00 at night; not when the doctor’s office is open.

The other issue is that doctors and nurses are too busy to sit down and spend a lot of time going over many caregiving details. They can hand us some books to read that they have never read, and they can give us a “high-altitude” briefing on a topic, but a detailed account is not likely to happen.  They schedule patients fifteen minutes apart in most physician offices, which does not allow for detailed impromptu training.