Many caregivers are not aware that Virginia Emergency Management (VEM) has an entire web page devoted to helping individuals with disabilities and their caregivers prepare for emergencies. It’s incredible how many resources are available if you only know about them. It’s difficult for non-disabled individuals to cope in an emergency, but it’s particularly tricky for those with special needs. Therefore, you must begin preparing for emergencies before they happen if you hope to make it through the crisis unscathed. The VEM webpage has a lot of great information. I encourage you to seek it out. In the meantime, here are some of the highlights.

Get the FEMA Mobile App

Recommended essential items in the kit include:

In addition, the American Red Cross Recommends adding the following:

Preparing for Disaster for People with Disabilities and other Special Needs

Preparing for Disaster
for People with
Disabilities and other
Special Needs

Tips for Those with Behavior Issues

Part of the role of caregiving is preparing for emergencies while hoping that you never experience one. Many wonder if they would respond bravely or if they would freeze. Almost everyone fears being the decision-making in an emergency and having everyone look to them for direction. That’s especially true when they don’t have a clue what to do! That’s one reason why having a plan is so important.  If the time comes that everyone is looking to you to find out what to do, you want to have something to say.

What is Emergency Preparedness?  Just what it says. It’s preparing in advance for emergencies. What does that mean for you?  I’ll outline them first and then go over each.

Get an Emergency Alert System

If you don’t have one already, I strongly recommend you subscribe to an emergency alert system. Emergency alert or alarm systems are dispatch systems you call by pressing a device you wear.  The device alerts dispatch that you need attention. Dispatch calls you to see what you need. Suppose you pressed the device by mistake? “No problem. Have a nice day. Goodbye,” is how they would respond.

However, if you need help, they immediately take a history, tell you what to do for safety, call for emergency assistance, call whomever you might want to notify other than who might be with you at the time, and stay with you on the phone until help arrives. The dispatcher coordinates all activity until the rescue squad takes over and call back later to make sure the patient receives the care needed and the family is okay.  They are wonderful.

Lynn and I both wear emergency buttons around our necks that we press for help if something happens to one of us.  We have used them many times, and I strongly recommend you get one.  There are many types.  I recommend finding one that meets your needs and orders it today—seriously.

In making your decision, consider the following in making a choice.

Prepare in Advance with "Go" Bags

While it’s not right for all caregiver situations, if you are a caregiver for someone who has a long-term chronic health condition, trips to the emergency department are not uncommon. Chronic illnesses always have a balance that must be maintained, and if that balance tilts, then a trip to the ED is often the result. Unfortunately, I’ve made the trip several times and expect there to be many more ahead. After the first few, I put together a “Go” bag and a “Medical Information” Sheet that I keep prepared for when I must leave in a hurry.

The “Go” Bag is a suitcase I keep partially packed with toiletry items I need for staying at the hospital for a few days and two days of supplies for Lynn.

Carry Medical History With You

I created a pre-printed Medical Pre-Registration form that I carry with me to all medical appointments and admissions.  Hospitals and clinics are required to reconcile a patient’s medications with you on each visit.  Having this document saves a lot of time.  I hand it to the nurse, review it, give it back, and don’t have to discuss medications.  Doing it that way works so much better for me.  Without this sheet, the nurses ask me about the drugs Lynn is taking by referring to them using the generic name. I know his medicine by the brand name; therefore, I have difficulty recognizing which medicine she is checking.

The Medical Pre-Registration form I use lists all his medications, allergies, the pharmacy we use, the over-the-counter medications he takes, his insurance information, and his significant diagnosis.   This information is all the primary information needed in a crisis.  EMS and Healthcare offices love it. 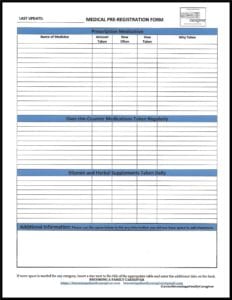 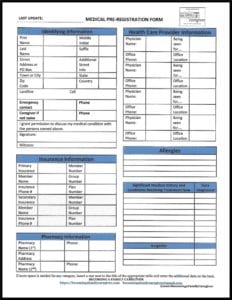 I share our story of a near fatality for the following lessons:

When faced with a traumatic event, your body feels a great deal of stress. You may have heard of the fight/flight reaction where your body produces adrenalin to prepare to fight or run away from something threatening to harm it.  Well, that’s basically what happens in an emergency. Your body prepares you to deal with whatever is threatening you by dumping in a lot of extra adrenalin along with some other chemicals to help you be prepared to fight. As a result, you get a lot of raw emotion and end up feeling like this:

Some people have a more difficult time dealing with the traumatic event and just can’t seem to get over what happened.  Their stress level seems more along the line of an emotional shock, and they act a lot like the behavior described below.

If these symptoms persist beyond a few weeks, it may be a sign of a post-traumatic severe stress reaction to the event that happened.  If you find the symptoms lingering, please seek a professional to evaluate your medical history and offer you advice on how to best move forward in combating the challenges you are facing.  You need recommendations that are effective and suited for you versus something that worked for a friend of a friend.

Real-Life Example of Preparing for an Emergency

Preparing for Emergencies can Save a Life.

In the back of my mind, I’m always preparing for an emergency, I think. Sitting at my computer one morning in 2018, I had one.  Through God’s grace, I just happened to be home that morning working when it happened.

As I was working, I heard a loud, heavy thud and then a crack followed by our daytime caregiver shouting, “Lynn!”

I immediately jump up and run to the bedroom, knowing what I would find.  Our caregiver was moving him from bed to shower using the overhead lift, and from the sound I heard, he had fainted and fallen out of the lift.

When I arrived on the scene, she was attempting to lift him from the floor.

He was unresponsive but eyes open, breathing but puffing out his cheeks with each breath, indicating possible post-seizure activity. He wears a Rescue Alert button, which I pushed immediately for help as I started checking his pulse.  I couldn’t remember the location of my blood pressure cuff or my pulse ox.  My brain was too scattered to remember.

Since I was a nurse, I had our caregiver talk to the Rescue Alert dispatcher until the EMS arrived while I stayed by Lynn’s side. By the time EMS arrived, Lynn was alert.

He had been on his way to the toilet for his morning business and insisted he was not hurt and did not need to go to the hospital as they questioned him and attempted to get him to go.  He and I argued about his decision; he won.  I told the paramedic as EMS left not to go far because I expected that I would be calling them back shortly after he had his bowel movement.

Immediately after EMS left, when I returned to the bedroom, our caregiver showed me an enlarging knot on the back of Lynn’s head. His ability to communicate was also starting to become affected. I asked if he was ready to go to the hospital now, and he stated, “Let’s go.” From that point on, he said, “Let’s go, Let’s go. Let’s go.”

I called back the rescue squad and explained the change. As soon as I made the change, I grabbed both of our “Go bags” and threw them in the van.  I usually load his power chair but didn’t bother this time.  I figured I would come back for it when I had more time.

EMS came back and quickly loaded him.  At first, I followed them in our van and kept up; then, suddenly, they took off.   Within seconds they were out of sight, so I knew something had happened that spooked them, and they decided they needed to get to the hospital quickly. That’s never good news.  All I could do then was pray and put him in God’s hands. However, I decided that I had better notify his Mom and son of what had happened, just in case. I did and proceeded to the hospital to wait.

Waiting at the Hospital

At the hospital, I asked to join him immediately but had to continue to wait.  I explained that his medical history was complicated, and I could probably provide information beneficial to their decision-making if allowed back. Still, they did not let me go back.  However, I don’t know if the front desk did not tell the medical team what I said or if the medical team decided.

Later, however, once I could go to the trauma area and met with the doctor, she told me about his inability to move due to his head injury. I told her that it was not likely related because he had not moved any of his limbs in years. They allowed me to give a full history, which altered their perception of the extent of the damage developing.  He had three areas in his brain bleeding, and they needed to know what was being affected; therefore, my information was essential to their treatment plans, which was why I insisted on being heard by the doctor in charge once I was allowed on site.